What are Uterine Fibroids?

Uterine Fibroids are benign (non-cancerous) masses within the muscular portion of the uterus. 20-40% of women 35 years and older have fibroids. They are more common in African-American women. They are often asymptomatic, however, some women can experience significant symptoms related to uterine bleeding and enlargement of the uterus that can be life altering and cause great limitations on activities of daily living.

Are my symptoms from Fibroids?

The most common symptom related to fibroids is excessive menstruation or bleeding. This usually begins as an increase in flow and length of menstruation. It can progress to very heavy periods and significant interperiod bleeding and may ultimately result in anemia or low blood counts. Fibroids also cause symptoms related to enlagement of the uterus. When the fibroids grow, they enlarge the uterus which can press on nearby structures. This can cause pelvic pain, increased urinary frequency, constipation, and a general bloated or full feeling in the pelvis.

In the past, hysterectomy or Myomectomy or removal of the uterus or selected masses was the only curative option for uterine fibroids. However, these are major surgeries that involve general anesthesia, moderate risks and long recovery periods. Over the last 10 years, a common alternative to surgical treatments has been uterine fibroid embolization or UFE. 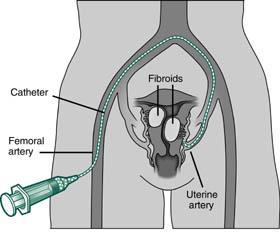 Known medically as uterine artery embolization, this is an excellent alternative approach to the treatment of fibroids that blocks the arteries that supply blood to the fibroids. It is a minimally invasive procedure, which means it requires only a tiny nick in the skin, and is performed while the patient is conscious but sedated — drowsy and feeling no pain.
VIA interventional radiologists were among the first in the tristate area to perform UAE for the treatment of uterine fibroids and have one of the largest experiences with the procedure in the tristate area.  VIA interventional radiologists participated in the national uterine fibroid registry, a large multicenter research trial to investigate the benefits of UAE.

To perform the procedure, the interventional radiologist makes a small nick in the skin (less than one-quarter of an inch) at the crease at the top of the leg to access the femoral artery, and inserts a tiny tube (catheter) into the artery. Local anesthesia is used so the needle puncture is not painful. The interventional radiologist steers the catheter through the artery to the uterus using X-ray imaging (fluoroscopy) to guide the catheter's progress. The catheter is moved into the uterine artery at a point where it divides into the multiple vessels supplying blood to the fibroids.

An arteriogram (a series of images taken while radiographic dye is injected) is performed to provide a road map of the blood supply to the uterus and fibroids. 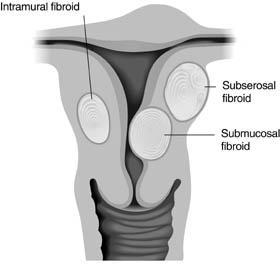 Uterine Artery Embolization has significantly less risk than conventional surgery/hysterectomy/myomectomy for the treatment of uterine fibroids.  Surgery is much more invasive and has a much higher risk for bleeding, infection, anesthesia complications, and debilitating hernias.  The recovery period for surgery is 6 to 8 weeks in the best cases, and can last for 6 months in some patients.  Patients who have uterine fibroid embolization are often back to work in 4-5 days.

“I can’t believe I waited so long to have the procedure” Laura S.

“The results were wonderful”  Sarah L.

“I was back to work and feeling great in no time”  Jen H.

A woman considering uterine fibroid embolization needs a gynecological work-up to make sure that fibroid tumors are the actual cause of her symptoms. Imaging of the uterus by magnetic resonance imaging (MRI) or ultrasonography is performed to fully assess the size, number and location of the fibroids. Occasionally your gynecologist may want to take a direct look by performing laparoscopy. If bleeding is a major symptom, a biopsy of the endometrium—the inner lining of the uterus—may be done to rule out cancer.

Most patients having uterine fibroid embolization are released that evening or stay overnight in the hospital for pain control and observation. Patients typically experience pelvic cramps for several days after uterine fibroid embolization, and possibly mild nausea and low-grade fever as well. The cramps are most severe during the first 24 hours after the procedure, and improve rapidly over the next several days. While in the hospital, the discomfort usually is well controlled with a narcotic pump, which dispenses intravenous pain medication. Oral pain medication will be provided when you are discharged home the following day. Most patients will recover from the effects of the procedure within one to two weeks after uterine fibroid embolization, and will be able to return to their normal activities.

It usually takes two to three months for the fibroids to shrink enough so that bulk-related symptoms such as pain and pressure improve. It is common for heavy bleeding to improve during the first menstrual cycle following the procedure. 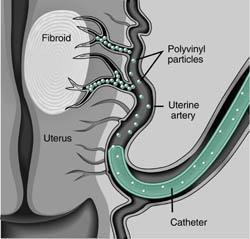 How Does The Procedure Work?

By blocking blood flow to the fibroids, uterine fibroid embolization in effect "starves" them of the blood they need to grow. When deprived of blood, the tumor masses die, and then develop into scar tissue and shrink in size. The symptoms they previously caused become less bothersome or disappear altogether. Multiple fibroids may be treated at the same session by uterine fibroid embolization, and even very large ones can be effectively treated by this procedure.

How Is The Procedure Performed?

Uterine fibroid embolization is carried out in an angiography suite equipped with an x-ray machine, where sterile conditions are maintained. Your heart rate, blood pressure, electrocardiogram, breathing and blood oxygen level will be monitored constantly during the procedure, which typically takes between 60 and 90 minutes.

After injecting a sedative to make you sleepy and a local anesthetic to numb the skin at the groin, the interventional radiologist will make a small nick in the skin less than a quarter inch long and thread a thin tube (catheter) into the femoral artery. Using x-ray guidance, and periodic injections of radiographic contrast material to map the blood vessels, the catheter is threaded into the uterine arteries. Under x-ray observation, the particles are injected until blood flow in the uterine arteries is blocked. In most cases, both uterine arteries can be treated through a single catheter insertion. After completing uterine fibroid embolization, the site of skin puncture is cleaned and bandaged.

What Will I Experience During The Procedure?

Most patients having uterine fibroid embolization remain overnight in the hospital for pain control and observation. Patients typically experience pelvic cramps for several days after uterine fibroid embolization, and possibly mild nausea and low-grade fever as well. The cramps are most severe during the first 24 hours after the procedure, and improve rapidly over the next several days. While in the hospital, the discomfort usually is well controlled with a narcotic pump, which dispenses intravenous pain medication. Oral pain medication will be provided when you are discharged home the following day. Most patients will recover from the effects of the procedure within one to two weeks after uterine fibroid embolization, and will be able to return to their normal activities.

It usually takes two to three months for the fibroids to shrink enough so that bulk-related symptoms such as pain and pressure improve. It is common for heavy bleeding to improve during the first menstrual cycle following the procedure.

Most women are able to return to work one to two weeks after uterine fibroid embolization, but occasionally patients take longer to recover fully.

Who Interprets The Results And How Do I Get Them?

The interventional radiologist who performs your procedure will interpret the results and will work with your gynecologist or primary care physician to ensure proper follow-up care.

Expected Results:
Fibroid embolization was first studied in the United States by Scott Goodwin, M.D., of the University of California Los Angeles, who reported his results in 1997. Since that time, a number of interventional radiologists have studied the procedure and have reported similar success with the technique reported by Dr. Goodwin.

The results of studies that have been published or presented at scientific meetings report that 78 percent to 94 percent of women who have the procedure experience significant or total relief of pain and other symptoms, with the large majority of patients considerably improved. The procedure has been successful even when multiple fibroids are involved. Most patients have rated the procedure as "very tolerable." The expected average reduction in the volume (size) of the fibroids is 50 percent after three months, with a reduction in the overall size of the uterus of about 40 percent.

The long-term outcome is not known as only short-term follow-up is available. It is not yet known if the fibroids can re-grow, however no recurrences have occurred in women who have been followed for up to six years.

What Are The Benefits Vs. Risks?

Fibroid embolization is considered to be very safe, however, there are some associated risks, as there are with almost any medical procedure. Most patients experience moderate to severe pain and cramping in the first several hours following the procedure; some experience nausea and, possibly, fever. These symptoms can be controlled with appropriate medications. Most symptoms are substantially improved by the next morning, however, there may be some pain and cramping for several days or more. Many women report returning to work within a week of having the procedure.

Long-term complications are not expected, although questions about potential side effects remain.

What Are The Limitations Of Uterine Fibroid Embolization?

Uterine fibroid embolization (UFE) should not be done in women who have no symptoms from their fibroid tumors; when cancer is a possibility; or when there is inflammation or infection in the pelvis. Uterine fibroid embolization also should be avoided in pregnant women and when the kidneys are not working properly—a condition known as renal insufficiency. A woman who is very allergic to contrast material containing iodine should receive another treatment option.

At present, it remains difficult for women in some parts of the country to learn about uterine fibroid embolization or make arrangements to have the procedure. Not all gynecologists are familiar with this relatively new method of treating uterine fibroids, and rely instead on the conventional approach—surgery.

Schedule a consultation with one of our specialists today!